The Rarity That is The Time Traveler’s Wife

This post contains spoilers. Just a heads up for those who haven’t read the book or watched the movie.

It’s been a while since I’ve written about a book I’ve read and I figured that this book just seems fitting for this month. So, I’m now putting my carefully hidden hopeless romantic streak on full display so I could gush talk about my favorite couple in literature, Henry and Clare. 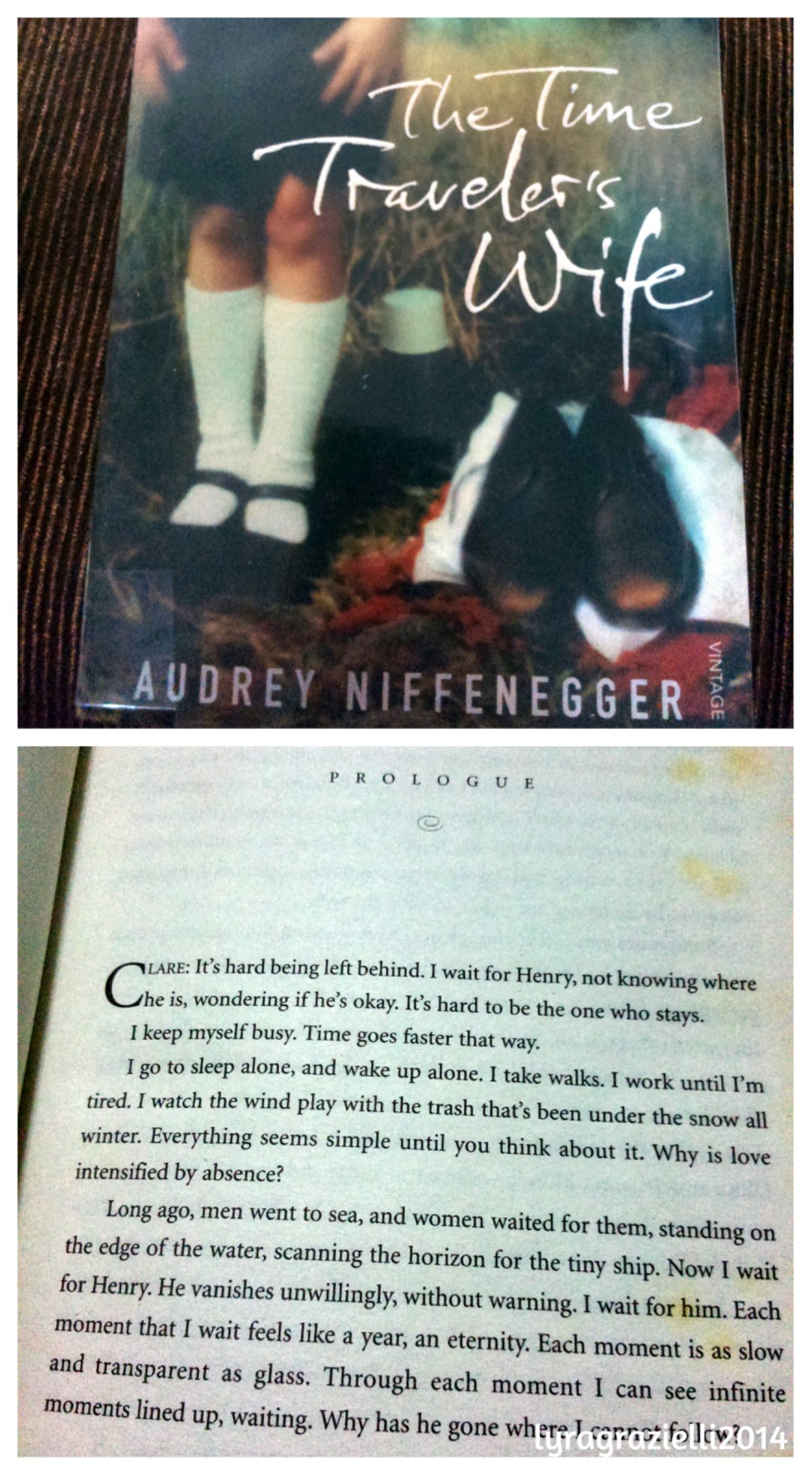 Told in the perspective of both Henry and Clare, the Time Traveler’s Wife is a beautifully written love story. It explores the fantastical possibility of something most of us has wished for at least once in our lives: to travel through time. But instead of dwelling on the wonder of it, Audrey Niffenegger chose to illuminate what it does to people; what it does to the time traveler, and what it does to the people who wait for them to come back.

Clare met Henry the first time when she was six and he was thirty-six. Henry met Clare the first time when he was twenty-eight and she was twenty. Clare has known Henry her whole life. Henry has known Clare for less than half of his. Of all the love stories I’ve read, the “ships” and “OTPs” and couples over the years, I think that Henry and Clare are probably the pair most in love with each other.

The first time they met (officially) was one of my favorite scenes in the book. It kinda set the tone of the whole book for me, more than the prologue did. Henry is the one who leaves; the one who feels like he was given a lifeline. Clare is the one who waits; the one who thinks she knows what she’s getting into.

“I’m at a loss because because I am in love with a man who is standing before me with no memories of me at all. Everything is in the future for him. I want to laugh at the weirdness of the whole thing. I’m flooded with years of knowledge of Henry, while he’s looking at me perplexed and fearful.”

-Clare at age 20,  upon meeting present Henry for the first time

Clare has been in love with Henry her whole life and she will be for the rest of it. She waited for the man she knew would be her husband and patiently helped him catch up when they finally met and he had no idea who she was.

Six years old is probably the best age for Clare to meet Henry, simply because children are more accepting of impossibilities than adults. Clare grew up knowing all about Henry and by the time she meets the present-day Henry for the first time, he was already a huge part of her life. By then, she has truly and fully decided that she will love Henry for the rest of her life. And that love for him gets her through his regular disappearances, her difficult miscarriages, the years of waiting, and the constant fear that Henry comes back hurt or that he may not come back at all.

“As I stand in the elevator, dazed, I realized that a massive winning lottery ticket chunk of my future has somehow found me here in the present, and I start to laugh. I cross the lobby, and as I run down the stairs to the street I see Clare running across Washington Square, jumping and whooping, and I am near tears and I don’t know why.”

-Henry at age 28, after meeting Claire the first time

Henry has a genetic condition that causes him to suddenly travel back to his past or future. He doesn’t know when it will happen and he doesn’t know when in his life he’ll end up going.  Over the years, he has developed a somewhat practical code of ethics; he stole clothes and food when he needed them, but he never gave his past self any information that would give him more of an advantage over other people than he already has. He had no choice on when he will go and to where, but he makes the most of it.

His future self has met Clare more than 150 times before his present self did. He didn’t know her, but he felt that she will be someone important.

“I turned my head and there is Henry. So simple, as though I’ve been doing it all my life…So simple. Here we are. Here and now, finally now.”

Henry is everything to Clare, but that does not mean her world revolved around him. I loved that while Henry is the center of her life, she still did her own thing. She is a strong, independent young woman who has her own career. She has her moods, as artists apparently seem to have, and she values her solitude. She is a rock; solid and strong whenever Henry starts to waver and she has the strength to push Henry to do the things he should do whenever he hesitates.

There were moments she gets so tired of Henry and their situation and she closes herself off to get away from it all. But for Clare, it is simple: she would always, always wait for him to return and will always be relieved everytime he comes back whole.

“Our love has been the thread through the labyrinth, the net under the high-wire walker, the only real thing in this strange life of mine that I could ever trust. Tonight I feel that my love for you has more density in this world than I do, myself: as though it could linger on after me and surround you, keep you, hold you.”

Henry’s world, what little he has control over, was consumed with making Clare happy.  He became everything Clare needed him to be: homework tutor during childhood, confidante during her teenage years, doting husband, and number one fan of her art. He didn’t try hard, it just became natural to him to be what she needed.

But though he does his best to always be honest with her, he doesn’t tell her more than she needs to know. Was it wrong that Henry didn’t tell her he knew exactly when he’d die? Maybe. But all Henry wanted to do was to keep Clare happy for as long as he could, and he knows that she won’t always be when he’s gone. So he does everything he can to make her happy every single day to leave her with great memories when he’s gone.

“And we laugh and laugh, and nothing can ever be sad, no one can be lost or dead or far away. Right now we are here and nothing can mar our perfection or steal the joy of this perfect moment.”

Henry and Clare tried to live as normally as they can. But there was always this underlying feeling that they might miss out. So, they make the most of every moment that they are happily together. It doesn’t mean that they avoid fights or that they don’t get mad at each other, they actually get mad at each other quite a lot. But they try to keep their life as stress-free and fight-free as possible (which is how life should be, to my way of thinking) because they probably figured that the time-traveling thing is a huge thing already.

“I hate to think of you waiting. I know that you have been waiting for me all your life, always uncertain of how long this patch of waiting would be…When I am dead. Stop waiting and be free. Of me – put me deep inside you and then go out in the world and be free. Love the world and yourself in it, move through it as though it offers no resistance, as though the world is your natural element…We will see each other again, Clare. Until then, live, fully, present in the world, which is so beautiful.

Faith and patience. If love is the fuel that drives this story, then faith and patience are what make it work. Clare waited patiently for fourteen years to meet present-day Henry. And after his death, she waited forty-seven years, longer than they had been together, to see him again. She waited whenever he goes elsewhen, and while she quietly despairs that Henry might one day not come back to her, she believes that it’s not for lack of wanting and trying. She does what he asked and lived her life well. But still she waits, even when he tells her not to.

For Henry, no matter when he would be, would always yearn to return to Clare. Even through all the difficulties, all the problems, all the pain, all the complications, it is always Clare he wants to return to. And he would never doubt that Clare would be there when he comes back; he knows she would always wait. He wants her free and happy so he asks her to let him go, to enjoy and live her life even when he’s gone. But he knew that Clare would wait, even when he tells her not to.

“I lie awake worrying that you might disappear and never come back. I lie awake brooding about some stuff I sort of half know about in the future. but I have total faith in the idea that we are supposed to be together.”

I so obviously love this story. Not only because I think it’s a wonderful piece of work (Audrey Niffenegger, can I be you when I grow up?) but because it is in sync with my idea of love.

Yes, Henry and Clare believed that they were destined to be together. If they read Coelho, I’m pretty sure they believed that the universe conspired to bring them together. But instead of blindly letting destiny work things out for them, they did it themselves. They did not depend on destiny and the universe to keep them together, they worked on it to make sure that they do.

This is a book about love. Not the blind kind of love, but the kind that sees and endures the bad. It is the kind of love that transcends time, space, and weirdness. It is an extraordinary love story and you would think that no one in real life would choose to be in that kind of situation. Maybe. But Henry and Clare were just like a regular couple who fought, had falling outs, and were full of worries and doubts. They had choices just like any other couple. Clare could have chosen to just forget about it, to decide it is not worth all the trouble. Henry could have chosen to remain alone and not subject Clare and himself to a complicated life. But they didn’t. They had a choice and they chose to endure.

In the end, they did make it work for as long as they could. And while the ending might not be what romantics out there want to read, it was a great bittersweet ending to a love that lasted beyond a lifetime.

I love you, always. Time is nothing.