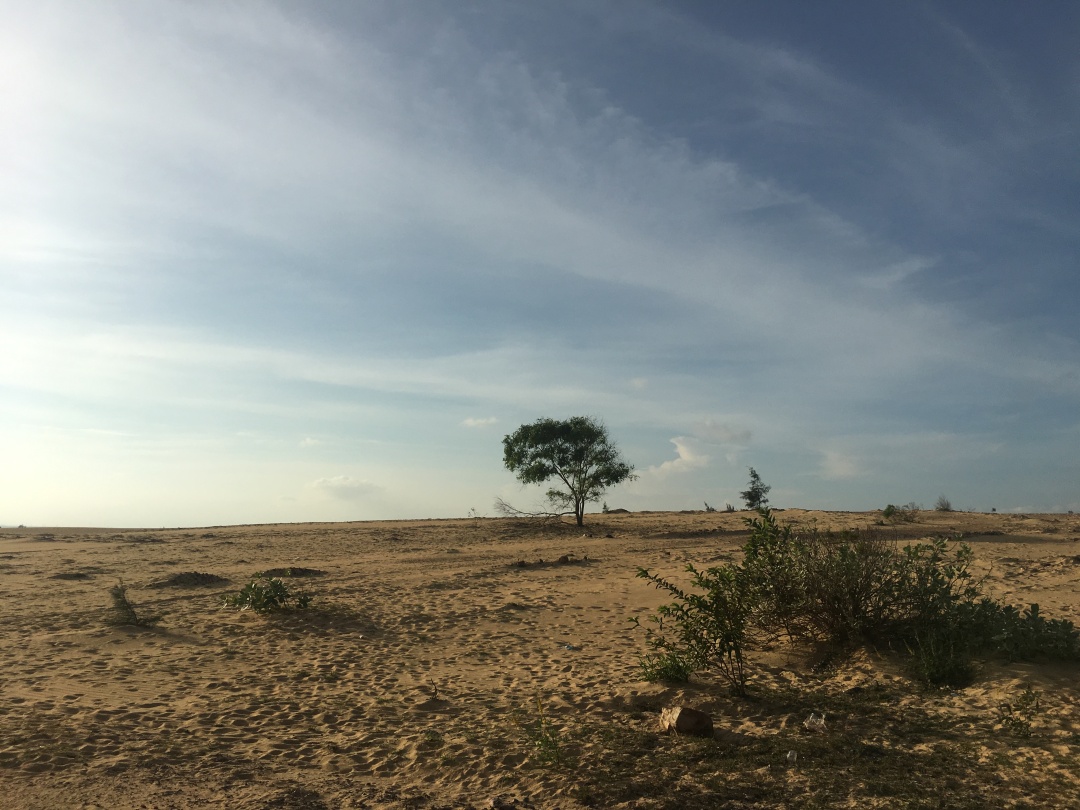 Or, the 5 times I fell in love in Quy Nhon

Quy Nhon was a whim. The only reason I even went to Quy Nhon was because I wanted to try the train from Ho Chi Minh but didn’t want to spend so much time on it.

I figured since the whole trip is 7pm to 7am, I’d just sleep most of the trip away anyway, so sure. The adventure begins the moment I arrived at the hostel at 7:15am.

I was early, so I dropped off my stuff at the hostel and asked the lady at reception what’s the nearest thing to do that morning.

She opened up Google maps and showed me the way to the beach and to Han Mac Tu’s tomb. Me, a person eternally in search for the next beach trip, got so excited. I asked her if I can swim in it just to make sure I don’t get arrested or killed by dangerous waters.

I was slightly disappointed but I persisted, asking why. I mean, that’s a long-ass stretch of beach right there with pretty placid waters so why don’t people swim in the morning.

She looked at me as if I was insane and said “because it’s cold!”

After a 10 minute walk, which included crossing an 8-lane road, I reached the beach (which is literally just beside said 8-lane road). I’ve always been a fan of the calm sea in the mornings so I went ahead and stripped down to my suit to swim.

I contemplated going back to the hostel to change after my (very) quick dip but decided against it. The sun was strong, the wind was wild – my clothes were bound to dry up soon.

And it did. My clothes were dry, I was freezing, but I fell so deeply in love with mornings in Quy Nhon.

It wasn’t exactly early morning, but the beach was quiet. The wind and the waves drown out the city noises even though the street is just there. I was able to meditate, something I’ve needed but neglected to do for weeks before.

Then the sun got a bit too hot out there in the open and I decided to move on.

The way to a woman’s heart is through her stomach

I figured I’d eat since my last meal was just before I left Ho Chi Minh. I found this cart just along the beach and when I approached, the lady just looked at me, pointed at a plate and a glass, said “one?” , and pointed at a seat facing the beach.

I just nodded and sat where she wanted me to.

After about 10 minutes, I was presented with this:

My first thought was: wait, this is street food? Also, don’t ask me what this is because I have no idea what it’s called. I didn’t ask and honestly I don’t think the lady and I would understand each other beyond hand signals so I just smiled and accepted what she gave me.

Besides, it looked delicious so I dug in.

By the goddess, this is what I came to Vietnam for. At that moment, I’m at the happiest I’ve been when it comes to food -related things.

The first time I came to Vietnam, I was with family and didn’t get to enjoy street food much. Plus we were on a guided tour. That’s why I chose to go to Vietnam alone this time around. Within 2 hours of setting foot in Quy Nhon, and I’m enjoying my solitude and good food.

And don’t even get me started on the coffee. I’ve had epiphanies while drinking sidestreet ca phe sua da.

That first morning’s meal would set the tone for my fortnight-long love affair with Vietnam’s street food.

When I arrived back at the hostel, my bed was ready. The lady at reception told me that they’re offering free tours, all I need is a motorbike.

I don’t know how to drive one so I just said no thanks. Luckily, my roommate offered to let me ride with him if I wanted.

I didn’t bother asking for the names of where we’re going. All that I’m aware of is that we’re gonna go to port to ride a boat to some hidden beach then go sandboarding.

Basically, I put my life in the hands (or, more accurately, motorcycle) of someone I met less than 5 minutes ago as we joined a bunch of strangers on a boat to a deserted beach.

When we arrived at the cove, the sun was way too hot and I spent the first 10 minutes giving two Frenchmen a lecture on the importance of sunscreen.

We then proceeded to scramble through slippery rocks, taking care not to bash our heads on them, to get to this really small rock cove that gets swallowed up by the waves.

It was a good place to contemplate some things and I began thinking about the beauty and freedom of having an untethered life – no plans, no overthinking, no responsibilities – just me and endless possibilities.

I came to the realisation that the beauty of an untethered life comes from the fact that it is impossible. That there will always be people and feelings that would pull you back in.

As I stood in the shade of the towering rocks, with the ocean rushing toward me, I revelled in the thought that I’ve chosen those people and feelings well.

I haven’t always, but at that point, in that moment, I know I have. And it was one of the best feelings I’ve had after quite some time.

Taking time for the moments that demand silence

I’m not really sure where in Quy Nhon we were at that time but when we got off the boat back at the port, it took about at 30 minute ride to get to the sand dunes. We got there just a couple of hours before sunset, the air was humid, and the sand just made things a little bit stickier.

The getting back up isn’t, though.

After a couple of tries, I sat down and watched everyone else. I love that everyone in the group (there were probably around 15 people) are just so game about the whole thing. But it had been a long and exciting day and we kinda broke off into smaller groups.

My roommate sat beside me and we complained for a bit about the humidity before shutting up and just watched the sun set over the sand.

There are views that just grab you at the throat with their beauty, and refuses to let go so long as you can see them. It was one of those. Everyone got quiet because the moment demanded it. We just all watched the sun kiss the earth.

Then someone yelled “let’s go!” and 3 people stripped off their bikinis and boardshorts and ran down the sand into the lake.

I’m up for a lot of things but skinny dipping on what looks to be a stagnant lake in the middle of sand dunes isn’t one of them.

Sometimes you end up being practice and you love it

My favourite thing to do in Quy Nhon is taking long walks in their spacious sidewalks and then lounging at the beach at the end of the day.

I experienced city envy during those walks. Growing up in Metro Manila meant I got used to narrow sidewalks filled with street vendors and asshole drivers who don’t follow traffic rules.

In Quy Nhon, the sidewalks are as wide as their streets and everyone followed all the lights and lines and signs. I don’t see litter on the streets. And in the afternoons, at roughly around 4pm, you see a group of people cleaning up what litter are on the beach.

But what I noticed is that while there are some tourists such as myself, it’s not as much as in Ho Chi Minh city or in Danang or Hoi An. That means that everything Quy Nhon has, is mainly for it’s locals.

In the afternoons, the beach is filled not of tourists but of young men playing football or of parents with their children.

What I also noticed as that these people don’t necessarily know each other. Maybe they know each other by face or maybe it’s just for love of the game. But the groups of people playing football generally just let whoever approaches them join the game.

Whenever I find myself hanging out on the beach, at least one local would find their way to me to strike up a conversation. And they’re always honest about the fact that they do that because they want to practice their English.

I found it inspiring and humbling, that most of them would share their hopes and aspirations with me, a stranger. And I marvel at their confidence in being able to bare themselves open like that.

There is one particular conversation I remember the most. He was telling me about how he’s learning coding for two reasons. The first and obvious reason is that it’s where the world is headed now and gives him the best chance at getting a good job.

The second reason is because he is fascinated by it. About the process and the logic behind it. He added that this is the main reason he’s studying coding because if he only wanted a comfortable life, he could just open a store and he’s have that in Quy Nhon.

But he wanted challenge. He wanted to be able to see where his knowledge would take him. And I admire that greatly.

Ready to do it all over again

On the morning I was about to leave, my roommate woke me up at an ungodly hour of 5:30 and asked where I was planning to go next. After finding out that, yeah, we would be going to the same cities, he asked if I wanted to join him on his motorbike.

I figured the views would be better than if I was on the train so I said yes.

As we drove out of Quy Nhon that morning, I felt a sadness similar to what I feel whenever I finish a really good book.

But I fell in love many times in and with Quy Nhon and I can’t wait to do it all over again in the next city.

Next stop: Hoi An.