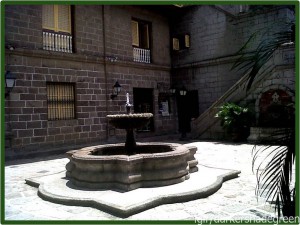 I’ve been feeling restless and cooped up this past week so I decided to take a break from myself to go out and explore…by myself. Yeah, I kinda didn’t think that one through. But I guess there is a difference between slowly going crazy because I’m alone and sick at home and being alone outside and exploring.

Anyway, I thought what better place to do that (the exploring, not the going crazy) than in one of the only two places I absolutely love in the city of Manila. Intramuros.

Intramuros, or the “Walled City,” has a very long history. The place where Intramuros now stood was once a settlement before the Spaniards came to conquer the Philippines. This settlement was where the city of Manila was founded, and became the seat of the Spanish sovereignty over the orient for over three hundred years. The walls were built as defenses from threats of invasions, and became the pillars of what is now a national heritage.

I have always loved going to Intramuros. Even when I was a kid, educational trips generally include a visit to Fort Santiago, probably the most popular fortification in Intramuros. This time, howver, I decided to skip it and just walk along General Luna street and see what I’d stumble upon.

Once a year, our family tradition of Visita Iglesia on Good Friday always brings us to San Agustin Church and the Manila Cathedral in Intramuros. Which means once a year, I get to walk most of the length the General Luna street. But Intramuros on a Good Friday is different compared to the rest of the year. During Good Friday, tourists and vendors alike roam the cobblestone streets and a mesh of different languages fill the air. But I’m getting ahead of myself.

Intramuros has struck the balance between the old and the new; several of its streets are still made of cobblestone, modern transportation parked in front of stone buildings, paved roads running between coloniel-era achitecture, and the clip-clop of horses pulling kalesas compete with the hum of car engines.

This kind of balance is actually not by chance. I remember back in college, I had an Art Studies class and we were tasked to hypothetically create an itinerary for a tour of different schools in Manila based on the design. One of the schools we included was San Juan de Letran, which is found within the walls of Intramuros. We were informed that new building designs should first be approved by Intramuros management to make sure that it blends well with the rest of the city. So, kudos to management for that.

You can see signs of that everywhere; new building designs or renovations, while indeed looking new, still has that Spanish-era stone building feel that tells you that it would age quite well. Though, according to history books, most of the structures within Intramuros are restorations; the San Agustin Church is the only structure that survived (with just damages and not totally destroyed like the Manila Cathedral pictured in the lower-left of the frame below) the eight-day siege when the Americans liberated the Philippines from the Japanese in World War 2.

As I walk the length of General Luna street, I came across this memorial for the “over 100,000 men, women, children, and infants killed in Manila during the battle of liberation,” the battle that turned the city into rubble. Unfortunately, the memorial was turned into a makeshift skating park by some kids. Call me uptight, but I think people should have a little more respect for it than that.

After that kinda depressing turn, I walked on, occasionally getting stopped by tourists asking for directions. I decided to go to the Plaza San Luis complex in front of the San Agustin Church to explore what’s behind the interesting facade…

And stumbled upon Casa Manila. Casa Manila is a house museum. Actually, the whole of the Plaza San Luis is a house museum. See, circa 1850, large stone houses of affluent families usually include a courtyard and the ground level of the house is usually rented out to shopkeepers. Casa Manila’s ground floor has souvenir shops, antique shops, and a restaurant. Unfortunately, the courtyard is being outfitted with garish red and white tables for a wedding reception (it’s rented out for events) when I was there. For a visual, I have below a photo of the courtyard I took a couple of months back.

Back to Casa Manila Museum. Sorry, kids, no pictures allowed. But let me describe it to you. Have you watched The Mask of Zorro? Anthony Hopkins, Antonio Banderas, Catherine Zeta-Jones? Yeah, it’s that kind of house.

It’s a large, spacious adobe stone house with beautiful wooden floors that you, as a a viewer, are forbidden to walk on. that’s what the red carpet is for. The house reflects a true Filipino family culture, or a Filipino culture as taught by the Spanish. It has an entresuelo (mezzanine) where clients or tenants are entertained before going to the oficina (office). It also has extra bedrooms in the entresuelo, where visitors or even unmarried aunts or uncles can sleep, an anteroom or parlor where the family plays games or entertains friends, a sala (living room) where the family entertains important guests or holds soirees, an oratorio (prayer room) where the family gathers everyday for evening prayer, cuartos (bedrooms), cuarto principal (master’s bedroom that’s about as big as the dining room), comedor (dining room), cocina (kitchen) with a stone oven, firewood, and large metal pots and pans, letrina (toilet) for two (weird, I know. The marker o the door says some houses have more that 2 and have chess games in the arms of the toilets. Their version of the smartphone,  I guess), and bano (bathroom with a tub).

All of the rooms have large windows made of capiz shells, a couple have mini-balconies, all have high ceilings, and all are filled with large, beautiful, heavy, intricately-designed antique wooden furniture that would break the hearts of thousands of forest conservation activists.

After exiting through the kitchen, viewers of the museum are finally allowed to take pictures. 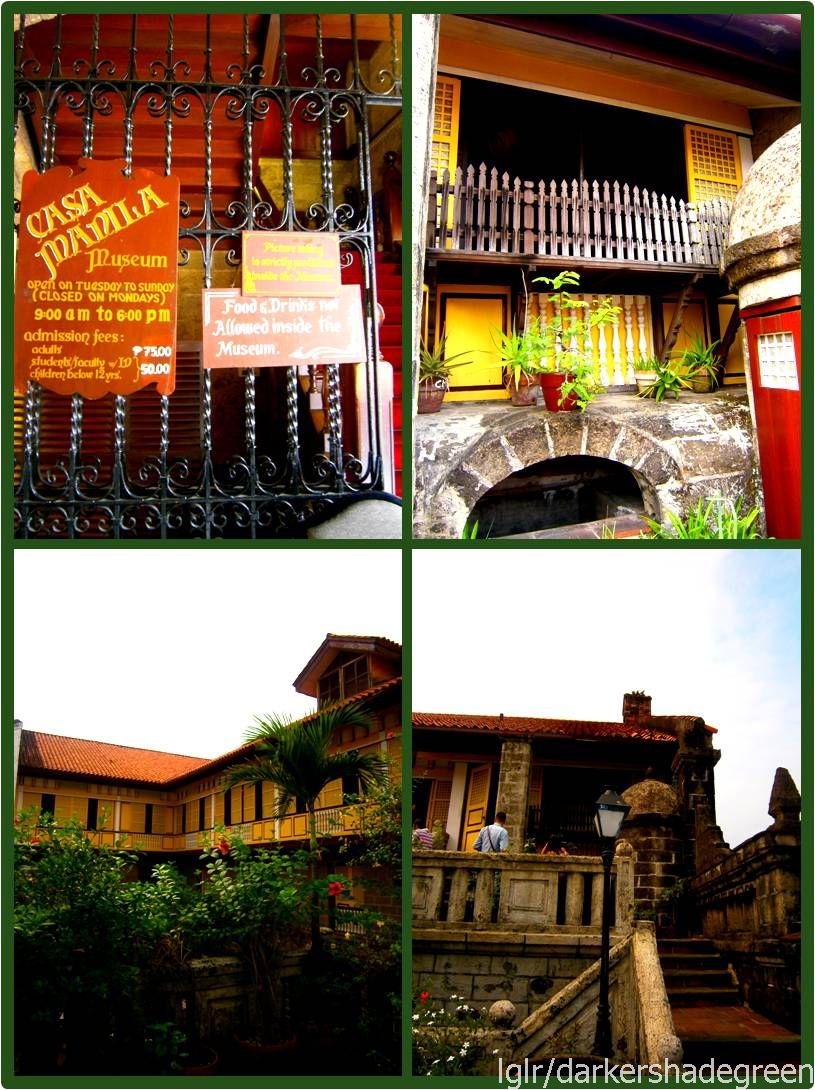 After the museum, I walked around the complex some more and discovered beautiful stone walls, a real but now not working water well, generous archways, and buwis-buhay stairs.

I also decided to browse around the ground floor shops in the complex. The souvenir shop, The Paper Tole Shop, is this kitchy souvenir shop filled with a myriad of things with prizes ranging from P10.00 to P5,000.00. I lost about 20 minutes browsing through the wooden anito figurines, the framed dioramas, the paper and cloth bags, and the different Intramuros- and Old Manila-inspired items that the owner makes. I also watched the owner make paper fans for a couple of minutes.

I also rested a bit at the restaurant. Barbara’s has a restaurant area where they have buffet lunch with a live performer and a dinner buffet that includes a cultural show. At around P400 for lunch and P500 for dinner, you get good food, a wonderful old-timey ambience, and a show. Not bad.

I decided to stay in the al fresco area, a couple of meters from the restaurant and near the complex’s courtyard. It apparently is a favorite rest area of tourists. It is actually a good place for a beer or two; quiet and breezy. Seats, however, are not that comfortable as they’re made of wood and those with backs are made of iron. But, hey, for a tired explorer, any item resembling a chair is comfortable.

I decided to call it a day and trudged on to the Padre Burgos Ave exit of Intramuros. I walked because it was such a breezy afternoon and I missed the sun. Good thing too, because had I not, I would not have come across this building.

The whole structure itself is a study of history. It used to be the Lourdes Church and Convent, but was destroyed in 1945 (yes, during the same siege that destroyed most of Intramuros) and moved to another city. The building was restored (rebuilt?) and now houses the Silahis Center.

They have everything from woven baskets, large wooden furniture, water lily paper, paintings, and such. I even saw several sungka sets, a skirt, a bed, and several large anito figurine.

The Silahis Center was my last stop in my exploration of Intramuros. Isn’t it amazing how much can be seen walking along just one street there? I am planning to return sometime soon to visit San Agustin Church and Museum ( I wasn’t able to because of backto-back wedding in the church and a field trip in the museum) as well as walk along some other streets (Intramuros has lots of them).

2. In relation with the above, wear comfortable shoes. Bring sunglasses, hat, or umbrella.  Also, if you’re planning to enter the churches, don’t wear shorts, miniskirts, or very revealing outfits as you might not be allowed in.

3. Given that you’ll be walking around, it’s best to explore Intramuros on a sunny day. January and February are good months because it’s mostly sunny but the breeze is cool, barring climate change. Avoid going on rainy days. It’s not much fun.

4. Having said what I said in number 3, try to experience an Intramuros Good Friday. Good Friday usually falls late March or early April. For 2013, Good Friday is on March 29. Yes, it is sweltering (again, unless climate change factors in) and you’ll be navigating through throngs of people but it is an interesting experience.

5. Get ahold of the Intramuros map. It shows where the attractions are. This is very helpful if you’re going to DIY.

6. If you do not want to go DIY, there are several people and groups offering tours. At a cost, of course. There’s the Intramuros Heritage tour, Old Manila Walks, and the tour I so wanted to try myself but haven’t gotten around to, Carlos Celdran’s Walk  This Way.

7. Casa Manila is open 9am to 6pm everyday except Mondays. It costs P75.oo for adults and P50.00 for kids. It is worth it. I went there early afternoon so I got to see it in the daylight. I want to return and see how it looks like when it’s dark out.

8. As with everywhere else: take care of your belongings, watch where you walk, respect the people, structure, and foliage, and follow rules

One thought on “A Break from Routine: Solo Intramuros Exploration”